Women and members of visible ethnic minorities report experiencing or witnessing more judgement, misconduct and inequality in the workplace

TORONTO, Nov. 25, 2020 /CNW/ - A new survey from ADP Canada and Maru/Blue demonstrates that Canadians believe their workplaces have room to improve when it comes to issues of diversity and inclusion. Specifically, working Canadians who belong to a visible ethnic minority1 reported that, at their current place of work, they have experienced or witnessed more judgement or misconduct based on ethnicity or skin colour, more negative impacts on their career and greater feelings of discomfort in the workplace. However, there are some positives, as the survey also noted greater awareness of these issues among younger workers, with nearly half (47%) of employed Canadians aged 18 to 34 saying they would be more loyal to their organization if they took a stand, publicly, on diversity and inclusion.

Moreover, respondents identifying as members of visible ethnic minorities also reported negative effects on their career advancement, with 32 per cent of respondents in this category believing their ethnicity has negatively impacted their career growth, and 19 per cent saying prejudice or lack of diversity and inclusion based on their ethnicity has influenced their decision to leave an employer.

Looking at gender, 19 per cent of working women reported witnessing or experiencing judgement or misconduct based on gender and 22 per cent believe their gender has negatively impacted their career advancement. 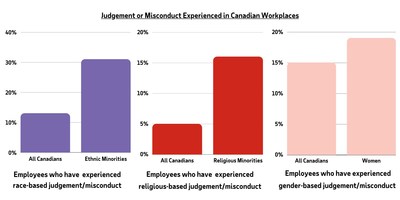 Diverse Voices Not Being Heard

Additionally, half of employed Canadians who belong to a visible ethnic minority (50%) believe their background is not represented within the make-up of their management team.

"With visible ethnic and religious minorities reporting more discomfort about sharing their ideas at work, employed Canadians within these communities may not have a strong sense of belonging at work and may not  feel their input is heard when trying to participate in discussions," said Reetu Bajaj, HR Advisor at ADP Canada. "These same individuals may also perceive that they are not represented within their management team."

Diversity and Inclusion Becoming a Priority for Workplaces Around the Country

When asked how diversity and inclusion were integrated into the corporate culture of their organization, Canadian workers identified composition of the workforce, onboarding and training, and surveys and employee feedback as the primary vehicles.

However, 36 per cent of survey respondents felt that while their organization is taking steps in the right direction, diversity and inclusion is still not considered a priority.

"The fact that respondents who identify as being part of the Canadian cultural majority report being  less likely to experience or identify problematic behaviours in the workplace, indicates that these issues may be more widespread in the workplace than many Canadians think," said Reetu Bajaj, HR Advisor at ADP Canada. "While our survey also shows that conversations have started in half of Canadian workplaces, employers must be proactive in implementing a diverse and inclusive culture within their organizations to be respectful of human rights."

Workers aged 18 to 34 and visible ethnic minorities were the most vocal when it came to issues of diversity and inclusion. Top asks from these groups include a more diverse leadership team at their organization (30% and 32% respectively), and more events or initiatives that encourage cultural learning and inclusivity (29% and 27% respectively).

Nearly half of these younger workers (47%) also said they would feel more loyal to their organization if it publicly took a stand on diversity and inclusion, twice the response rate than that of the general working population (25%).

"There is undeniable evidence that diverse workforces support more productive and creative organizations," added Bajaj. "With the survey indicating that the younger generation of workers is more committed to social justice in the workplace, expectations around diversity and inclusion may be heavily-weighted attributes of ideal employers as the future of work emerges."

Judgement and misconduct in the workplace

Putting employee loyalty to the test

On conversations surrounding diversity and inclusion

An online survey of 1,546 working Canadians (including those working full and part time) was completed between October 23 and 29, 2020, using Maru/Blue's online panel. For comparison purposes, a probability sample of this size has an estimated margin of error (which measures sampling variability) of +/- 2.4%, 19 times out of 20.

Designing better ways to work through cutting-edge products, premium services and exceptional experiences that enable people to reach their full potential.  HR, Talent, Time Management, Benefits and Payroll.  Informed by data and designed for people. For more information about ADP Canada visit www.adp.ca or follow us on Twitter @ADP_CDA. 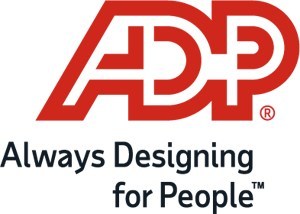